Board Game Printing with Custom Design Lid and Bottom Box 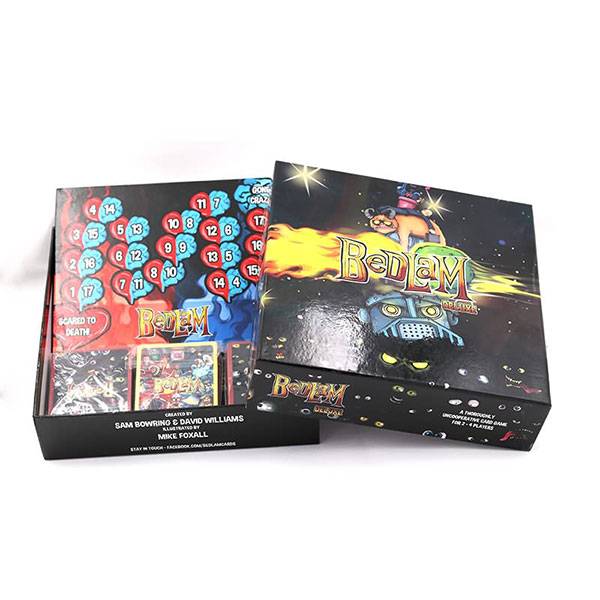 Board game
Card game is any game using playing cards as the primary device with which the game is played, be they traditional or game specific. Other items can be added in the game set like die or instruction booklet etc.

Board games originated in Germany and have been popular in Europe and America for decades, people meet friends or make friends by playing games. War, trade, culture, art, urban construction, history and many other aspects are involved in table games, most of them use paper materials with exquisite model to assist. It is a kind of face-to-face game with a strong emphasis on communication. Therefore, table games are the best way to communicate in various occasions like family leisure, friends gathering, and even business leisure, it is with a purer and more plain game nature.

The game is usually designed to be a multiplayer game, usually for 2-8 people, the time for one round of a game is normally from half an hour to two hours

The rules of the game are easy to understand, even children aged from 8-12 can master it. On the other hand, games require a lot of strategies and it makes the game equally attractive to adults

The game design uses a variety of themes such as history, economy, war, culture, art and architecture, as well as interesting rules, it helps maximize the interaction between players to participate. Compared with traditional table games in the way of moving steps by dice throwing and random selection, the modern table games are much richer.

Normally no player will be eliminated in halfway of the game, the game ends when one or more players achieve a certain goal or after playing certain rounds.

The drawing of the game design is full of artistic creativity, excellent production and exquisite materials. It makes every game a favorite collection for those game players.

The game has a good openness, supporting players to create or extend the rules. And participate in some open materials and rules for players to make their own good model, it is called Print & Play Games abroad.

Write your message here and send it to us